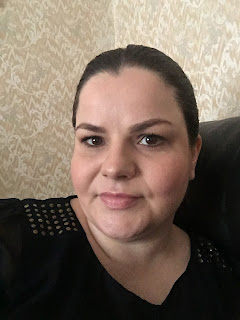 Well this week I turned the ripe old age of 34!!

Hubby had booked us a table at Harbour & Company in Donaghadee. We had never been before so we were looking forward to trying somewhere new.

When we arrived the staff were very friendly and welcoming. We went in through the bar area initially as we were unsure of where we were going, they were able to check and see that our table upstairs was ready for us. So we headed on up to be greeted with another very friendly and attentive staff member. 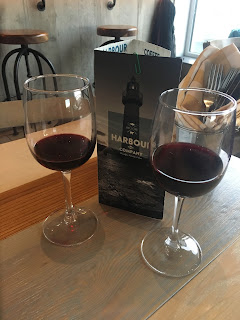 We got seated near the kitchen and bar area. The kitchen was open for all to see. I liked being able to watch the chef cooking the food. There is something comforting about being able to see whats going on.

We started with some wine. I am not a massive drinker anymore but it was my birthday so why not. Two small glasses of house merlot. I wouldn't drink anymore than one glass anymore just with the medication I am on.

We deliberated over the starters trying to decide whether to go for something seafood or not. In the end we decided to share two starters. Thomas chose the Chillied Prawns and I chose the Mussels. The Prawns were huge and had a nice amount of chilli. The mussels were in a tomato based soup which was as delicious as the mussels. The portions were definitely enough for sharing. 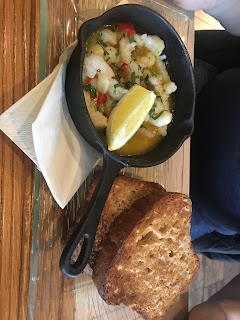 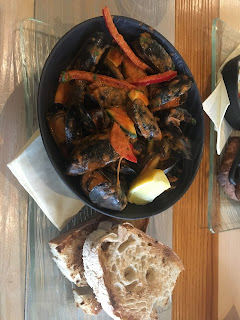 Then it was time for our steaks. As you can see there is a massive difference between the two ribeyes we got. Thomas had seen the 18oz bone in Ribeye on a friends facebook and decided thats what he wanted. I knew that there was no way I would make it through anything close to that, especially not if I wanted a dessert. So I went for a 10oz. It was delicious. So juicy and tender. We both get our steaks medium. I like a bit of pink to my beef. This was cooked perfectly. I judge a steak on whether or not you can eat it and not need to use the sauce it comes with. If the steak is done right then the flavour of the meat is enough and you don't need to add any sauce. We chose peppercorn sauce, it was not needed but was just a nice bonus flavour. I actually didnt use very much except for dipping my chips in to. We went for sweet potato fries and garlic potato cubes as our sides. We just popped them in the middle and dipped in to each. 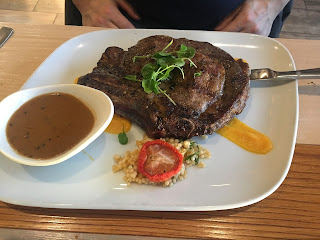 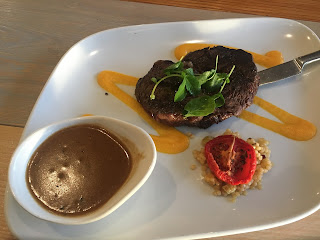 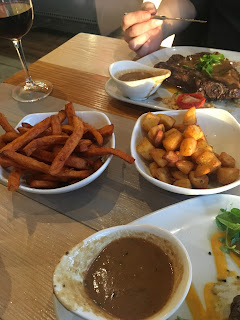 Our dessert just rounded of the night. We chose a slice of lemon cheesecake and a slice of pavlova. Once again we shared both. I swear I was so stuffed but it was all so worth it. Absolutely delicious. 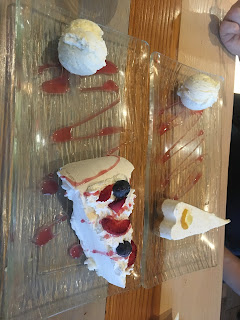 All in all it was a very enjoyable meal. The atmosphere was extremely welcoming and everyone seemed to be enjoying themselves. Even though it was a smaller room than some restaurants we have been in it wasn't noisy with the chatter. The environment was just very chill and casual. I would highly recommend Harbour and Company to anyone.

They have some specials on different evenings, check out below to see pics of the menu.

Thank you so much for reading. I hope you have enjoyed my first review on my new blog. Please let me know what your thoughts are. I would love to hear from you.

See you all soon, 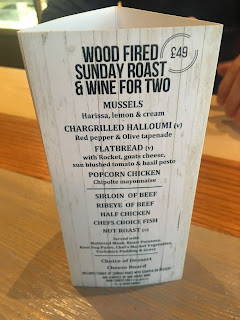 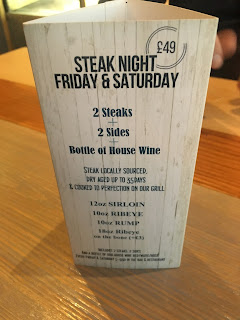 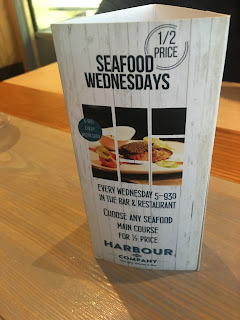 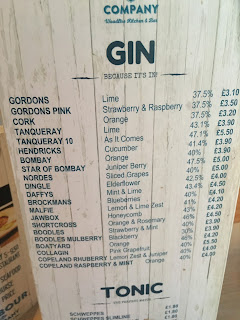 Popular posts from this blog

May 24, 2018
Hello my lovelies, I hope this post finds you well. As you know I am very in to my skincare and I am always trying new products to share with you all. A while back I was contacted by Aliza Naturals, a brand that I have to be honest and say I had never heard of. They told me all about a new product they had launched and wanted to know if I would be interested in trying it out and sharing my thoughts on it. After checking out their website and seeing that they were an all natural brand I was very intrigued. So after a little back and forward and me advising them that I am always 100% honest in my videos/blog posts and that as long as they were confident in their product we could of course work together. After a few days my package arrived and I was excited to see what this innovative product looked like. I had never seen a product like this and was very intrigued by the idea of a cleansing paper. I considered all of those people going on holidays or short trips and taking only hand
7 comments
Read more

April 25, 2019
Hello my lovelies, I hope you are all well. At christmas I decided it was time to start changing up my lighting at the salon and so I started to search for reasonably priced lights and while on instagram I kept getting sponsored posts for a ring light from Lytmeup, a brand I had never heard of. They were showing as £39 reduced from £89. I am always skeptical about these things, selling for less than half price. What are the chances that this offer is not going to end soon and is in actual fact a long term price. I thought, why not, lets give this brand a shot. So I made my purchase. I was then told that it could take up to a month to get delivered. That was disappointing, but I had already committed to it and had no choice but to wait. Around the end of January I picked up a parcel from the sorting office, it was very slim line and compact. I was pleased about that. I detest getting deliveries with a lot of extra packaging for no reason. I was so excited to open the parcel
Post a comment
Read more

July 04, 2018
Hello my lovelies, I hope this post finds you well. Yes you read this right. I don't believe that Fibromyalgia is a real illness!! Ok ok, put the pitch forks down!! Before you start a lynch mob, I am not saying that people with it aren't sick. Quite the opposite. I just feel that this mystery illness Fibromyalgia has more to it than just one illness! For a start it really isn't a diagnosis at all. It is the final straw after a process of elimination. You go through so many tests you will have had more pricks than kerplunk! You will have seen so many different doctors that you will feel like you see them more than your family. By the time they see you don't have a, b, c or d they have no clue so they tell you it is Fibromyalgia. They don't know how you got it, why you got it or really how to treat it either. Every study that is done contradicts the previous study. Some say its to do with nerves, some say its to do with blood. Some doctors claim there is a te
3 comments
Read more